Thus far in these blogs I have argued from Stephen Meyer’s position that proving God scientifically requires the use of abductive reasoning. Furthermore, the religious skeptic’s demand that God must be “proven scientifically” or else God does not exist, must be handled judiciously and not taken at face value. The common notion of materialism— Only what is material, what can be seen and measured, is real; therefore, if God cannot be observed, He does not exist—is untenable and myopic. The broad discipline we know as “Science” does not recognize such a limited approach to understanding the world around us. The scientific studies of origins and forensics demonstrate this. If the skeptic is willing to acknowledge the different, but still scientific method of historical science—piecing together present day clues to prove past events—as the right tool for this job, then his demand for scientific proof of God can be satisfied. If our hypothetical skeptic is willing to accept that argument, then we can continue. This blog entry will take the next step by looking at intelligence as scientific evidence for the existence of God.

We Are All Einsteins…Sort of

Is intelligence a substance? We all know it is not matter. But does it exist? I would like to ask the skeptic if intelligence is real. Perhaps I could make it personal and ask him if he possesses intelligence. If he says “no,” then that is going to be embarrassing for him and we should politely end the discussion. If he says “yes,” then he agrees that intelligence is recognizable, albeit not material. I could go on with him to acknowledge that according to some sectors of the scientific community, intelligence is even measurable (MENSA). Education systems around the world measure intelligence, or its compatriot, knowledge, through assigning scholastic grades. The points of this line of reasoning are to show that immaterial things do exist and that intelligence is particularly important in proving, or recognizing, the existence of God.

[Just a brief excursion: By contrast, the scientific community has proposed “chance” as the source, or cause of all things—ergo, including intelligence. Ironically, Darwin acknowledged the intuitive rationale for an intelligent designer. Neo Darwinist Richard Dawkins echoes that tenet of Scientism: “The beauty of biology, really, is the illusion of design.” That notion is inescapable. I think back on all of those National Geographic Nature documentaries we watched when our kids were young. Consistently, the narrator would refer to some creature’s distant ancestor “deciding” to change some anatomical feature in order to stay alive: “The great-horned watcha-madoodle grew that horn so that he could better dig for his favorite beetle and survive the ice-age.” It is rampant. In defending science, atheist and religious antagonist Jerry Coyne says, “We [scientists] may reach the limits of explanation for several reasons: because the evidence eludes us…or because our brains aren’t configured to puzzles out the answers” [highlights are mine] (Faith vs. Fact, pg. 227).

To “configure” indicates a configure-ATOR, an intelligent being having a design and purpose. Thankfully, Douglas Axe has written a very helpful book, in layman’s terms, that validates humanity’s common intuition that our world had to be designed purposefully. I HIGHLY recommend it. It is: Undeniable: How Biology Confirms our Intuition that Life is Designed. ]

What do Bill Gates and Teddy Roosevelt Have to do with DNA?

Meyer’s definition of information is patent in the very sentence I am writing and that you are reading. The sentence can exist because there is an alphabet; but the alphabet is not information. It is useless by itself. But it has the potential for a limitless amount of information. The letters become information when they are arranged in a purposed, particular sequence. Mathematician Claude Shannon is considered the originator of “information theory.” His work paved the way for the information age. If Jack Kilby—the inventor of the Integrated Circuit (IC)—is responsible for laying the groundwork for the hardware side of modern computing, then Claude Shannon is responsible for laying the groundwork for the “intelligence” within computers. Meyer says, “Shannon had taken nineteenth-century mathematician George Boole’ system of putting logical expressions in mathematical form and applied its categories of ‘true’ and ‘false’ [Boolean Algebra] to switches found in electronic circuits…His master’s thesis…became the foundation for digital-circuit and digital computer theory.” So, how does all of that relate to our topic? Enter DNA.

“DNA is like a computer program but far, far more advanced than any software ever created” (The Road Ahead, pg. 228. I found this quote through multiple secondary sources on the internet. The citation is credited to: http://www.uncommondescent.com/intelligent-design/he-said-it-bill-gates-on-the-genome-as-software/ accessed September 5, 2016).

The molecule known as “DNA” (Deoxyribonucleic Acid) is the built-in “operating software” for organic development. Meyer explains the “sequence hypothesis,” whereby “the chemical parts of DNA function like letters in a written language or symbols in a computer code” (Signature, pg. 12). It is pretty much common knowledge in our day that ALL features of ALL living things are the way they are because of DNA coding. That is astounding! What may be even more astounding, if that is possible, is how DNA works to replicate itself. There is no way I can fully explain it here. There’s a great video that simulates the process, embedded on Meyer’s website here. Now, you may be asking yourself, “How can we know if the information got there by natural means or by design?” I’m glad you asked. 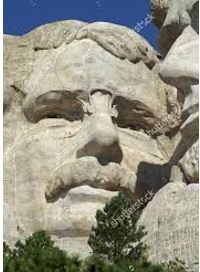 If you guessed that chance and natural causes formed the face on the left and an intelligent designer caused the face on the right, then you would be correct! Good job. But, how did you know that? Douglas Axe would likely say that it is intuitive. And that would be correct. A more sophisticated response is: “If an object or event is both complex and specified, then we should attribute it to intelligent design…We typically attribute to necessity highly probable events that recur repeatedly in a regular or lawlike way” (Meyer, Signature pg. 354). One face on Mt. Rushmore is convincing enough, but FOUR faces side-by-side just “seals the deal.” Meyer teaches us there is still more to be gleaned from his Mt. Rushmore analogy.

The evidence that Mt. Rushmore was planned and executed by an intelligent designer increases exponentially due to the fact that we can recognize the faces as those of former U.S. presidents. Meyer says,

“Observers recognize a pattern in the shapes that they know from an independent realm of experience, from seeing the faces of ex-presidents in photographs or paintings” (pg. 353).

We look at a picture of Teddy Roosevelt, then look at  Mt. Rushmore,  look at Mt. Rushmore, and then back at the picture. We observe that the images are of the same person. Therefore, we reasonably conclude that the best explanation for the faces on the mountain is NOT because they happened to appear randomly, by chance from erosion, but they were carved by someone.

From these points we identify three ways to determine if something exists because of intelligent design or by chance. The first is probability. The probabilities of DNA occurring by by chance are low, more like “zero.” Meyer’s research shows, “the probability of producing all the necessary proteins needed to service a minimally complex cell is 1 in 1044 multiplied by itself 250 times, or 1 in 1041,000” (Signature, pg. 213). For reference, the estimated number of protons, neutrons, and electrons in the observable universe is 1080 (Signature, pg. 212)! The 1 in 1041,000 number is the odds for having the bare minimum components of a cell. The complexity found in DNA would far exceed that. Secondly, repeated, complex patterns that achieve a goal or function indicate design. Thirdly, when those patterns have a corollary from a different context, or realm, then we see design.

The amazing functionality of the recurring codes in DNA has such a corollary in computers. I personally find the similarities to be mind-boggling. As if the programming and software likenesses weren’t enough evidence, we also see that both DNA and computers require physical environments in which to carry out their purposes. Organisms and computers have hardware in which to run the software. Imagine your personal computer becoming self-aware. Imagine the computer taking a look at itself and discovering it has systems within itself, a power supply, disk drive, memory cells, and electrical circuits. Then it goes further and learns that its entire computing process is made up of organized, logical, bits of electrical energy arranged in patterns of “1’s” and “0’s.” As 21st Century people, we know that such a computer did not just happen, but is the culmination of the work of Engineers from many disciplines. We humans are like that self-aware computer discovering the marvelous intricacies of how we were marvelously designed.

The next blog entry will continue with this comparative analysis. I will give examples of the similarity between these biological wonders and modern technology, in order to drive home the point that mankind’s science is overwhelmingly obvious proof of the Fingerprints of God in nature.